Anatomy and Biomechanics of the Trochlea

The patella has several functions in the human body including assisting in quadriceps extension by increasing the lever arm of the patellar tendon, centralizing the multi-directional forces transmitted from the four muscles of the quadriceps, distributing tension from the femur to the patellar tendon and protecting the tibiofemoral joint anteriorly [1]. During flexion and extension the patella articulates with the trochlea on the anterodistal end of the femur to form the patellofemoral joint. The trochlea is composed of a medial and lateral facet separated by a central groove that deviates laterally from the axis of the femoral shaft and deepens in depth distally. The sulcus angle measures the depth of the groove and averages 138° ± 6°. Between 0° and 40° of extension, the patella engages with the lateral facet of the trochlea and this engagement stabilizes the patella against the lateral pull of the quadriceps. Conversely, during flexion, the patella moves medially from 0° to 20°; beyond 20° of flexion, the patella catches and engages with the trochlea and then moves medially until 90° of flexion [2, 3]. 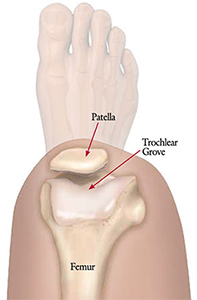 Because the patella engages with the trochlear groove in both flexion and extension, any alteration in trochlear anatomy can greatly influence the biomechanics and stability of the patellofemoral joint. A dysplastic trochlea is quantitatively defined as a sulcus angle >145°. This increased sulcus angle presents as a flattened, more shallow trochlear groove and can be a result of variations in facet height and/or groove depth; such trochlear variations can affect the relative measurements of associated anatomic landmarks, including the tibial tuberosity to trochlear groove (TT-TG) distance, the height of the patella and the lie of the patella, including patellar shift or tilt [2, 4]. Furthermore, these anatomic alterations can influence the integrity of surrounding soft-tissue structures like the medial patellofemoral ligament (MPFL), medial patellotibial ligament and the vastus medialis obliquus muscle (VMO). All of the aforementioned factors, when compromised or altered, can lead to recurrent episodes of atraumatic patellofemoral instability which the patient perceives as 'giving way' or 'popping out' or 'dislocating'. 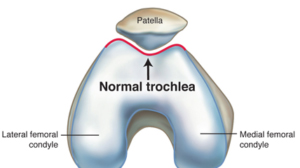 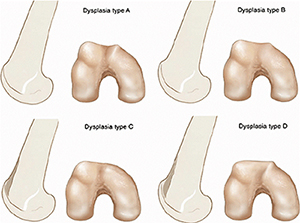 Patellofemoral instability is a spectrum of instability that can include patellar dislocations, which are estimated to occur at an incidence of 5.8 cases per 100,000, with an even higher incidence in those ages 10-17. Following a first dislocation, individuals are at increased risk to have subsequent dislocations [2]. A detailed history should be obtained from the patient about the dislocating events. In general, dislocation events are not benign and can cause increased damage with each subsequent event. Immediately after a dislocation a patient will experience pain, swelling, a loss of range of motion, and sometimes weakness while straightening the knee.

Physical examination should involve inspection of the patellar position. Many times the patella sits high (patella alta) or too far to the outside part of the knee (lateral). Swelling or bruising can indicate tearing of the joint lining and muscles on the inside of the knee. Patellar tracking is evaluated by having the patient bend and straighten the knee to see if the patella rides in the appropriate location in its groove. A 'J' sign indicates the pull of the patella tendon in a direction not in line with the trochlear groove. The patellar apprehension test can be performed to assess patellofemoral instability and has been reported to have 100% sensitivity and 88.4% specificity [5], although intra and inter-observer reliability are only rated as fair/moderate and poor, respectively [6].

Because of the limitations of physical exam alone, imaging is also used to assist in making a diagnosis; a lateral plain film can show three common signs of trochlear dysplasia: presence of a supratrochlear spur, crossing sign and double contour sign. Taken together these findings allow for classification according to the Dejour system [7]. A standard knee series of plain radiographs (x-rays) will show if there is a fracture of the patella or if there are other malalignment which may contribute to patellar instability or recurrent instability. Other important studies include a magnetic resonance image (MRI). This is typically ordered after an initial dislocation to ensure that there is not a cartilage fracture which could potentially be repaired. Furthermore, early MRI will show damage to the tissues that may be more difficult to see once swelling and inflammation recede. Computed tomography (CT or CAT scan) is not usually required for diagnosis, but can be obtained to confirm the type of dysplasia into one of four Dejour categories and perform other measurements which are useful in preoperative planning for reconstruction once the decision for surgery has been made [7]. Measurements of valgus alignment, sulcus angle, and tibial tubercle-trochlear groove distance help determine what type of corrective procedure is required and what degree of correction is needed. 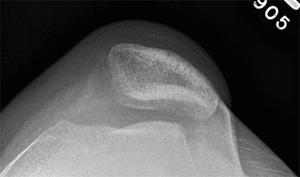 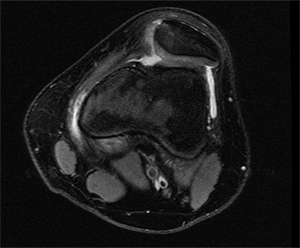 Individuals who have recurrent patellar dislocations and do not have patellofemoral arthritis or signs of trochlear cartilage wear are potential candidates for a trochleoplasty [7]. During this procedure, the lateral capsule is opened and the patella is retracted medially to access the trochlea. The periosteum and trochlear cartilage are detached from the subchondral bone as a flap and a new trochlear groove is modeled into the exposed subchondral bone. The chondral flap is then replaced over the newly formed groove and sutured into place. MPFL reconstruction or tibial tuberosity osteotomy may also be performed during the procedure, if indicated. Postoperatively, patients can bear immediate weight on crutches with an extension knee brace. Passive motion during the first few days is encouraged. Rehabilitation should focus on quadriceps and hamstring strengthening. At 12 weeks postoperatively, patients can start to run and at six months, a progressive return to sport can begin [7].

Because patellar instability is a syndrome with a constellation of findings and disease, in most cases, additional procedures are required to treat the soft tissue injury and/or cartilage injury. Each case is different and a thoughtful and individualized approach should be generated in every case prior to intervention to decrease the risk of failure and optimize the chances for success in a single definitive reconstructive surgery for this challenging problem.