Lateral Process Fractures of the Talus: The Snowboarder's Fracture 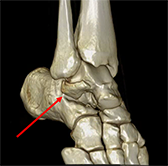 The talus is one of seven articulating foot bones that are located between the tibia and fibula of the leg and the metatarsal bones of the midfoot. The talus forms the lower part of the ankle joint, and articulates with the medial malleolus of the tibia and the lateral malleolus of the fibula. The ankle joint allows for dorsiflexion and plantarflexion of the foot. The underneath aspect of the talus articulates with the calcaneus, giving rise to the subtalar joint. This joint allows for inversion and eversion of the foot. The talus also articulates with a bone in front of it called the navicular, allowing for subtle movements of the midfoot that play an important role when walking on uneven ground.

A lateral process fracture of the talus occurs most frequently when the foot is dorsiflexed and eversion. The injury is acute and typically occurs when the outside of the talus is jammed heavily against the fibula.

The symptoms experienced with a fracture of the lateral process of the talus often resemble those of a severe ankle sprain. There is typically pain behind the lateral malleolus of the fibula, with accompanying swelling and bruising. There is usually also difficulty in walking and an inability to bear weight.

On physical examination, tenderness will be induced over the outside of the ankle and towards the front and outer border of the foot. It may be possible to identify the fracture on a plain x-ray, but the fracture line is often quite subtle and difficult to see due to overlapping bony structures. Ultrasound can be useful for detection of cortical disruption and ankle joint space effusion; however follow-up CT or MRI is often used to visualise the fracture line more clearly and provide information to fully appreciate the extent of the injury.

X-rays and CT scans not only confirm the diagnosis, but help determine the treatment course. The piece(s) of bone that breaks off the lateral process of the talus can vary in size and number. The pieces that break away can either be shifted away from their normal position (displaced) or remain in place (non-displaced). As the fracture can involve the articular surfaces of the ankle and subtalar joint, it is important to start appropriate treatment promptly to avoid further degeneration of the joint.

In the early stages of treatment, ice packs and pain-relieving medications can be beneficial in controlling pain and reducing swelling. If the fracture is such that the piece of broken bone is displaced less than 2mm, it can be treated with immobilization in a short leg cast or boot for 6 weeks, with no weight bearing for at least 4 weeks.

Many lateral process fractures of the talus are displaced or unstable enough to require surgical fixation. If the displacement is more than 2mm, an open reduction and internal fixation may be performed. This involves an incision on the lateral aspect of the ankle, through which lag screws or wires are used to stabilise the bone fragment to the talus body. If there are any loose bodies found during the surgery, these are also removed.

Sometimes the bone will be broken into multiple pieces (comminuted) that are non-viable. In this case, it may be necessary to excise these bone fragments from the ankle.

If the fracture has been stabilised surgically (with screws or wires), the typical recovery time is six weeks of relative immobilization and non-weight bearing. Once x-rays demonstrate adequate healing, return to normal activities can begin gradually. A course of physical therapy may be recommended to facilitate this transition. If the fractured fragments were excised, then weight bearing can begin as soon as comfortable. It can often take months for maximum improvement to be reached. 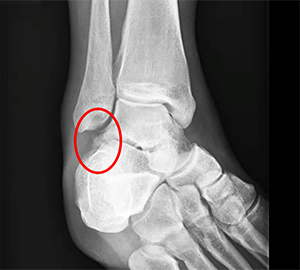 X-ray image demonstrating a lateral process fracture. Notice that thefracture is difficult to identify leading many of these injuries to be initially missed 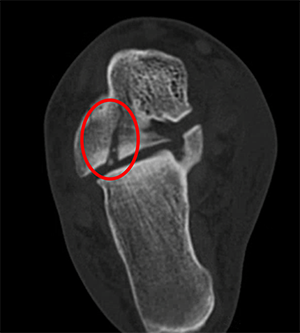 CT scan demonstrating the same fracture. Note the small fragments in the joint and the displacement between the joint surface