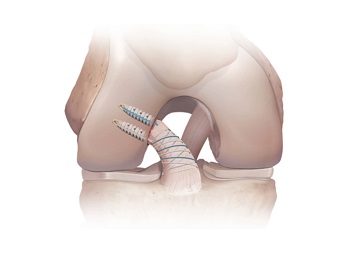 ACL tears are the most common ligament injury requiring surgery in the knee. They are most commonly due to twisting injuries to the knee. Without the ACL the knee loses a primary stabilizer and increased stress is transferred to the meniscus and cartilage. Excessive damage to the knee meniscus and cartilage results in arthritis which causes pain, stiffness, and loss of function.

The ACL ligament is about 3 cm long and is located in the central part of the knee where it connects the femur (thigh) and tibia (leg) bones. There are two parts or bundles to the ACL ligament like two strands of a rope. The anteromedial bundle controls the motion gliding forward and backwards and the posterolateral bundle controls twisting motions within the knee. It’s important that both bundles are functioning well for the overall health and stability of the knee.

Variations in normal knee looseness from person to person (stiffer versus ‘double-jointed’ people), muscle spasm, knee swelling, and pain can all make a surgeon’s physical examination the knee more difficult when assessing for ACL injury.

Therefore, an MRI is typically ordered to confirm the diagnosis. MRI is a very good test for detecting ACL injury, but is not perfect, and cannot always distinguish smaller or partial injuries as well.

While surgery is not always required for ACL injuries, it is commonly performed for patients who have instability with daily activities or who want to return to cutting or pivoting sports that require stability against twisting and gliding motions. Young patients who are active are good candidates for ACL surgery to protect against the cartilage and meniscus injuries which can result in arthritis.

While the terms are often used interchangeably there is an important distinction between ACL reconstruction and ACL repair. Repair means using the native tissue that was the original ACL and recreating the anatomy, like sewing the two ends of a rope back together. Reconstruction means to use new tissue to replace the original tissue that was damaged, like buying a new rope. When most people say that they underwent an ACL repair surgery, they usually mean a reconstruction. ACL reconstruction is one of the most commonly performed knee surgeries in the United States. ACL repair is currently only performed by a few surgeons in the United States and only under certain circumstances.

The Rationale for ACL Repair

For most injuries in the body which are treated surgically, repair is favored over reconstruction.

This is the case for the rotator cuff, Achilles tendon, ankle ligaments, tendons of the hand and forearm, meniscus in the knee, labrum in the hip and shoulder. The reason for this is because there is often no adequate substitute for the native tissue. In very severe or chronic injuries however, repair is not always possible.

Historically, open ACL repair was attempted by sewing the ligament back into place; however, the results of this were often unsuccessful and the procedure was largely abandoned in favor of reconstruction. It seems that at the time the ligament could not be reliably secured in the proper location long enough to allow healing while still allowing enough strength for moving the knee and performing the necessary rehabilitation during the healing process.

The advent of arthroscopy and more recent improvements in fixation devices such as suture anchors and minimally invasive suture passing devices have generated renewed interest in ACL repair.

Other knee ligaments (the MCL and PCL in particular) have a capacity for healing and because of this are often able to be treated non-surgically so the rationale remains that if the native ACL ligament can be stabilized early enough to allow an accelerated rehabilitation program it may have the same capacity for healing.

While not all tear pattern and not all patients are candidates for ACL repair, some are. In general, lower energy injuries where the tear is directly off the femur that are seen shortly after they occur may have the best chance for surgical repair.

In those cases, if the normal anatomy can be preserved, then full function can be returned in less time and with a potentially improved result. If there is failure after ACL repair, the exact same ACL reconstruction procedure can be performed as would be performed otherwise. The sacrifice is time in recovery and the need for a second procedure.

ACL repair is performed by using the same two incisions used in standard knee arthroscopy. Often, a third incision or portal is used. A suture passing device is inserted and using high strength suture both bundles of the ACL are separately sewn from the bottom (tibial end) towards the top (femur end). The sutures are then loaded into two anchors which are placed at the anatomic center of each bundle and tensioned into place. Only two small holes, or sockets, are created in the femur bone for placement of the anchors. Because no graft is taken and because the amount of bone drilling is minimal the amount of pain and swelling after surgery may be much less than after traditional ACL reconstruction.

Arthroscopic ACL repair is a new approach to the management of ACL injuries and may provide a means for a less invasive, quicker return to full function. At the Mammoth Orthopedic Institute we are currently performing and actively researching ACL repair as a viable treatment option for our patients.